Best Headphones Under $200: An Expert Review and Buyer’s Guide

Speaker Wire: A Quick Guide on Choosing the Right One for Your System

Logitech is often considered to be somewhat of a premium brand manufacturer of computer accessories, like keyboards, mice, and stereo speakers, and yet their products are always remarkably inexpensive.

This might be because Logitech products always work extremely well, are built to obviously very high standards, are dependable and really last, and have an especially fine sense of style. And, it must be said, their speakers tend to sound great.

As such, we here at Speakergy always enjoy writing a review of Logitech speakers, and this review of the Logitech Z200 2.0 computer speakers has been particularly enjoyable. This is a totally revised and re-written article – our first, very positive review covered the original Logitech z200 multimedia speakers, and now we turn to the latest incarnation – the Z200 2.0. And, if anything, the 2.0 is even better! 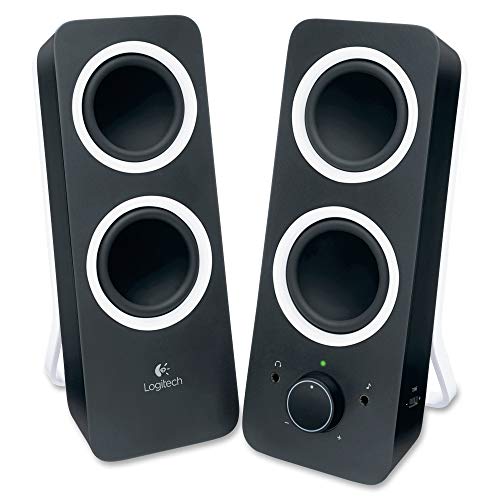 Logitech Z200 2.0 Speaker System - Black
$23.99
Check Price Buy Now on Ebay
We earn a commission if you click this link and make a purchase at no additional cost to you.

A sleek case with built-in stands makes the Z200 2.0 speakers tilt back at an angle which not only looks quite nice next to a computer screen but allows the sound to radiate upward at just the right angle. These are amplified speakers, and they have a surprising amount of power, so they will play probably as loud as you would ever want from desktop speakers.

Two small drivers adorn the face of each speaker. One is active, meaning it is connected to the internal amplifier, and the other is a passive radiator, which is not active or directly amplified but instead moves when the active speaker moves, and allows the Logitech Z200 2.0 to supply deeper bass than we would normally expect from this size (or price) of speakers.

There is a volume control on the right speaker, and so you can use this, or the computer’s volume control, or a combination of the two to turn the sound up and down. There is also a very handy headphone jack which is also affected by the volume control. The only other control, besides the power switch, is a tone control – a simple sliding switch meant to provide more or less bass.

The main connection cables which connect the Logitech Z200 2.0 speakers to your computer, or any other source, are wired into the speakers, and plug into the headphone output of your computer, phone, tablet or other device. There is an additional audio input plug on the right speaker, allowing you to plug in two different source devices at the same time – a great feature and very convenient.

The first thing you notice with these sleek little speakers is that they have a lot of bass! Not too much, mind you, but there is a surprisingly solid and extended foundation here, and way more than we might have expected. This was always a nice characteristic of these speakers, and if anything the newer 2.0 incarnation may have even a tad bit more.

You may be expecting to see little tweeters somewhere on the Logitech Z200 2.0 speakers, but they’re nowhere to be found. The top 2.5 inch driver is a full-range speaker, doing the job of both the tweeter and woofer. And while many might expect that this would lead to less detail or extension in the high frequencies, my listening seemed to suggest the exact opposite.

The wee paper tweeters in most speakers this size are so cheap and poorly made that they actually do very little to reproduce high frequencies, and tend to do a lot to produce high frequency noise and distortion instead. Understandably, people often mistake this noise for actual high frequency audio, and convince themselves that their new, extremely inexpensive speakers actually have nice highs.

But while the Logitech Z200 2.0 computer speakers do not have extremely extended high frequencies, like you would get in an expensive set of stereo speakers for your home system, the highs are actually excellent for this range of speakers, and with none of the noise or distortion we’ve come to expect. Instead, there’s more than sufficient high frequency information which is amazingly accurate, smooth and even sweet-sounding.

While a few people try to write very informative and critical reviews on the Logitech Z200 2.0 speakers, comparing them to higher-end home stereo speakers and using the same criteria of judgment, the vast majority of users keep it very simple, basically saying that while these may not be the greatest speakers in the world, they are absolutely amazing for the price. You regularly see comments about how much better the Z200 2.0s sound than the computer’s built-in speakers, and how much better the Logitechs sound than other computer or multimedia speakers.

Another frequent type of comment regards the design of the Logitech Z200 2.0 speakers. Customers seem to love the convenience of the 2 audio inputs, the volume control and the headphone output jack, as well as the nice, sleek and subtle styling and the overall high-quality look and feel of the Logitechs.

None of the professional review sites were silly enough to write really in-depth and analytical review of the Logitech Z200 2.0s (except me, I guess), but the reviewers were pretty unanimously impressed with the sound, the design and features, and the overall look and feel of these speakers. I don’t think I found a single review that didn’t rate them very highly – especially for the price – or give them a whole-hearted recommendation.

Final Thoughts – Are the Logitech Z200 2.0 Multimedia Speakers Any Good?

I spent a lot of time listening to the Logitech Z200 2.0 speakers while also auditioning and writing reviews for some much more expensive home stereo and home theater speaker systems, and while it seems that this might have put the little Logitechs at a severe disadvantage, it seemed instead to have an opposite effect.

Indeed, I kept thinking how much these diminutive and inexpensive speakers reminded me of some of the others I was considering – in detail, smoothness, sweetness, and musicality. Don’t get me wrong – these will never compete with 500 dollar stereo speakers, or even 200 dollar stereo speakers, but the Logitech Z200 2.0 multimedia speakers are almost certainly the best 30 dollar speakers I’ve ever heard, and are a thoroughly well-designed and well-made product.

Open-backed headphones are considered by many of the most discerning audiophiles to be the best of the best, with the finest sound quality you can get. And indeed, some of

Today we’re going to discuss perhaps the single most important and serious of all consumer electronics topics – the Cat Ear Headphones. No, I’m sorry, did I say important and

A few years ago I bought my wife a pair of nice Bose wireless earbuds which she had wanted for quite a while. She was very happy and excited –