How To Connect External Speakers To LG TV

Affiliate Disclosure: When you buy a product via our links, we sometimes earn a referral fee. Learn more

Television technology has grown to great heights, and the new picture standards have improved dramatically on video quality. But not many changes have been pronounced when it comes to sound quality in television. Even the major brands such as LG televisions require audio devices to be able to play high-quality sounds.

Though these televisions have built-in speakers, there is not much space inside them to push enough air for ambient sound quality.

They have thin cabinets, and owing to this minimal internal room, the audio from the LCD, Plasma, and OLED television always sounds flat and lifeless. Thus, it becomes mandatory to connect them with external speakers for an immersive sound experience.

Connecting an external speaker to the LG TV

All the LG televisions have built-in speakers, but users feel that even the latest models have weak sound capabilities. Their thin-sounding audio doesn’t complement the big screen and the three-dimensional motion pictures of these television sets.

Thus, the need for an external audio device, such as the speaker, becomes mandatory. Here are the ways to connect the external speaker to the LG TV.

The LG television does not have RCA audio outputs, but they have two audio outputs that we can use to connect to any audio receiver. They also have a headphone output that can connect with stereo RCA inputs and the RCA adapter. 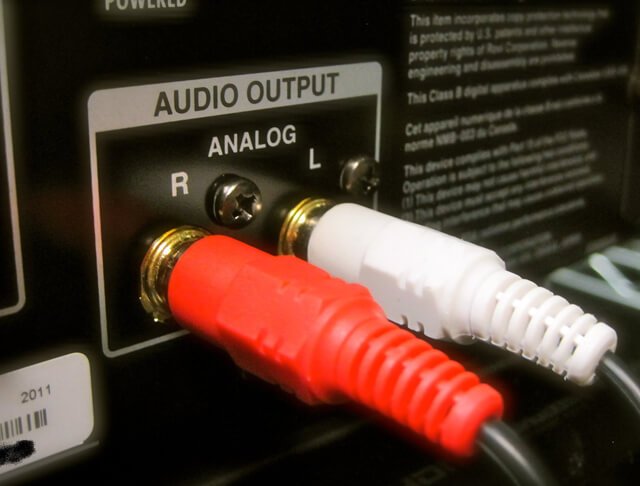 You may also like: The Best Bluetooth Speakers For Your Amazon Fire Stick

On a lot of new televisions, the RCA connections are not available, and thus the best way to establish the connection between the television set and the external speaker is with the help of a digital optical cable.

Connecting The TV With The Speakers Through HDMI Sockets

We may have to use transparent cables with square plugs to transfer the audio signals from the television to the HDMI-equipped speaker system.

The same cable connects the HDMI input of the television and the speaker system, and a separate audio connection between the soundbar and the TV is not required. You just have to make sure that both the devices are ARC compatible and are activated to use the HDMI format.

Connecting Through Bluetooth – For Wireless Connections

Connecting the LG TV with an external speaker through wireless mode, with the help of Bluetooth technology is becoming increasingly popular. As the connection is wireless, it doesn’t require any complex cables. But such high-end features are not available with all LG models.

If you have found both the pairing devices, you only have to turn on the Bluetooth of the television and the compatible audio system and start pairing them both for an immersive sound experience.

You may also like: Best Wireless Speakers For You

The LG brand now offers a distinctive and wireless way to connect the television with a wireless speaker system in its Nano Cell LED and LCD television and LG OLED television. LG partners with the Wireless Speaker and Audio Association (WiSA) in its select models that have a built-in firmware.

This firmware communicates with the special plugin USB dongle, called WiSA transmitter, that looks like a flash drive. This dongle allows the television to send sounds wirelessly to one or more compatible speakers and audio systems.

Select Sound Out and navigate to the Internal TV speaker and Audio Out feature. The Audio Out will be shown on the selection of the choices.

Now you can exponentiate the sound quality by playing audio from both the television and the external speaker.

Similarly, it is possible to play sound through the internal TV speakers and the headphones simultaneously as well.

Thus, there is an array of options to connect the LG TV with its speakers. By following any one of the above-mentioned options, it is possible to escalate the audio experience of the TV to many folds.

In case of questions contact us at: hello @ speakergy .com