Victrola Record Player Review and Buyer’s Guide: Should You Get One?

Richard Tyler Blevins Jr, or Ninja – as he’s known in the gaming community – is one of the best, and best known, online gamers in the world.

Like Shroud, Ninja’s move to the new platform seemed less based on money or career, and more on the desire to get back to the love and enjoyment of gaming.

Still, his financial situation has certainly not been negatively impacted by the move.

By last year, 2019, he had become the most popular player on the Twitch platform, where he had over 14 million followers, but he is also enormously popular on Mixer, and on YouTube as well, where he has over 23 million subscribers.

It is estimated that he currently makes over half a million dollars a month.

What Gaming Headphones does Ninja use? 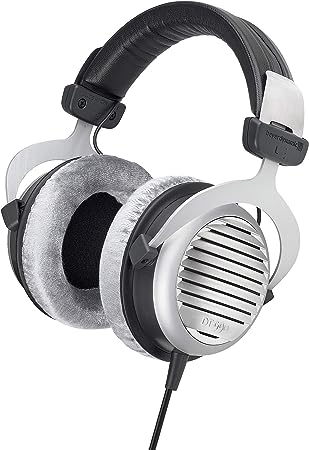 Beyerdynamic DT 990 Pro Studio Headphones
$188.00
Check Price
We earn a commission if you click this link and make a purchase at no additional cost to you.

As one of the most popular and successful gamers in the world, it is understandable that so many fans and aspiring pro gamers ask: What kind of gaming headphones does Ninja use?

The answer may surprise you: the Beyerdynamic DT 990 Pro Studio Headphones – not really a gaming headset at all!

A look at a list of his 5 most recent headsets is quite interesting.

From oldest to most recent, Ninja has used:

HyperX and ASTRO headsets are superb gaming tools, but after that Ninja went to what is still a great gaming headset, but from a company known even more for their hi-fi stereo equipment – Audio-Technica.

The last two, the Bose and his current weapon of choice, the Beyerdynamic, are straight-out audio gear, known for superior sound – especially the DT990s.

This may not, on second thought, really be that surprising.

More and more, gaming headsets are equipped with all kinds of really high-tech bells and whistles – haptic feedback, full surround imaging, advanced wireless and essentially professional quality omnidirectional microphones, all of which may really support and improve your game playing.

But ultimately none of that makes a whit of difference if you don’t hear the bolt being pulled back.

Put another way, with gaming headphones there is absolutely nothing more important than sound.

This is undoubtedly why audiophile quality headphones are being used more and more among serious gamers, and why the Beyerdynamic DT990 Pro headphones are the current choice not just for Ninja but for several other competitive gaming, streaming and walkthrough professionals at the very highest level.

What Makes the Beyerdynamic DT 990 Headphones so Great for Gaming?

he Beyerdynamics have astonishing levels of detail, coupled with wide dynamic range and superb fidelity, allowing all sounds to come through clearly and correctly, fully recognizable for what they are and distinguishable from the sometimes clamorous rush of other sound cues.

The smallest, softest sounds are clearly audible, and the biggest noises never break up or sound harsh or muddled, but come through with real impact – especially with the DT990’s deep, fast and powerful bass response.

And even without the latest and greatest advances in surround sound, a headphone with really precise phase accuracy and temporal delivery, like the DT 990, can offer far more precise spatial location and pinpoint positioning of teammates and opponents.

In fact, many gamers say that a basic stereo headset, with superb neutral sound reproduction on all levels, presents a more simple and understandable sound world, which is never manipulated into possibly incorrect representation and is thus more trustworthy while gaming.

It should not go without saying that these Beyerdynamic DT 990 Pros (and the other stereo headphones I’ve listed below) will also sound really amazing with music, and given their famous neutrality they work equally well with every musical genre.

The Beyerdynamic headphones are extremely light and easy to wear, and have such smooth, low distortion sound that even the longest gaming sessions will be comfortable and non-fatiguing.

What other Gaming Gear does Ninja use?

Ninja uses the Beyerdynamic DT 990 Pro gaming headset in conjunction with an Electro Voice RE-20 Microphone and a RODE PSA1 Microphone Arm, so that his commands and comments will come through to other players with the same superb sound quality he himself enjoys.

What other Stereo Headphones are good for Gaming?

Here are some other superb sounding stereo headphones, at a variety of price levels, that will also fully support and enhance the gaming experience:

And as for microphones, you should know that Ninja’s choice of microphone/arm setup by itself costs 550 dollars.

It seems that being heard and understood by his teammates or his audience is really important to Mr Blevins.

Remember, though, he does make half a million bucks a month!

High quality stereo headphones, like the Beyerdynamic DT 990 Pro, may in some ways seem like a step backwards in technology compared to the admittedly amazing new gaming headsets on the market today, but they will almost certainly offer better sound quality for the same money.

For a growing number of the best and most successful professional gamers in the world, Ninja included, this seems to be the most important thing.

After all, what are gaming headphones for, if not to hear the action with as much detail, accuracy and realism as possible?

There’s absolutely nothing like the feeling of shooting down an open road on your motorcycle, listening to your favorite music on really good speakers – especially when the speakers and

Turntables and vinyl records are more popular than ever, it seems, with hundreds of turntables currently being made and new models being introduced all the time. And while lots of

In the wonderful world of Hi-Fi, where one can spend more for a connector cable than I spent on my first car, you may well wonder if it’s possible to